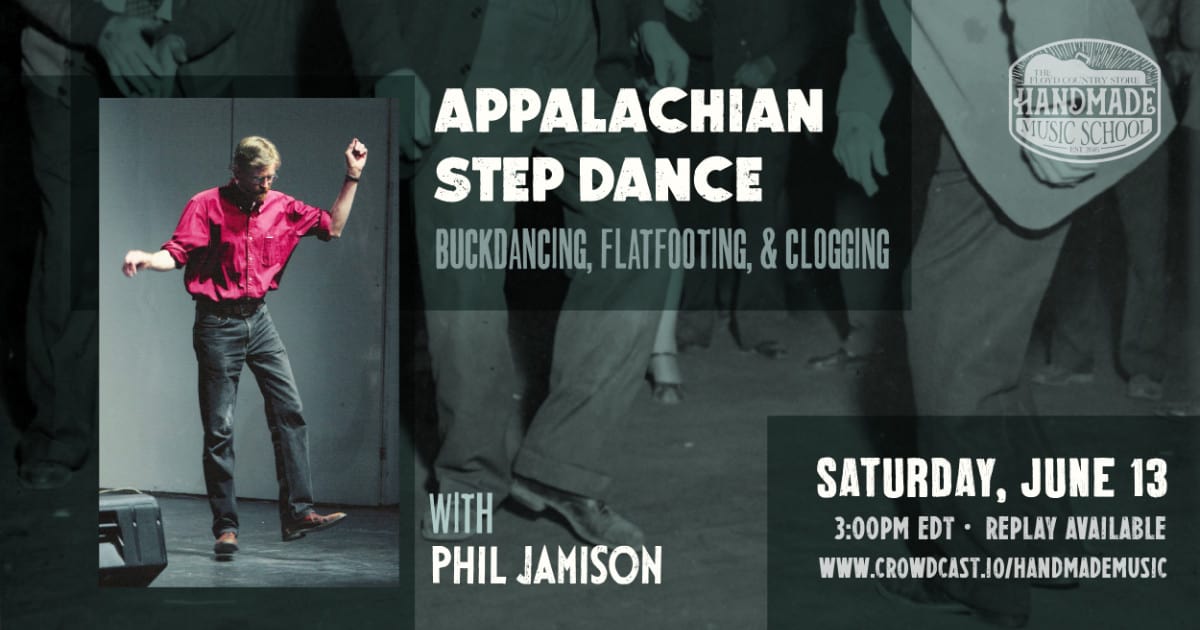 The Handmade Music School: Online Sessions presents Appalachian Step Dance: Buckdancing, Flatfooting, and Clogging with Phil Jamison on Saturday, June 13, 2020 at 3:00pm. The workshop will be presented via Crowdcast as part of our Handmade at Home online series. Cost is $1 to $100 (suggested donation of $15).

Special note: Recognizing the important historical influence that African-American dancers and culture had on the creation and development of these Appalachian dance traditions, some of the proceeds of this presentation will be made to benefit the local Montgomery County, Radford City, Floyd County Branch of the NAACP.

At music venues, such as the Floyd Country Store in Floyd, Virginia, when an old-time or bluegrass band plays a lively breakdown, it is not uncommon to see dancers get out on the floor and accompany the music with their feet. This traditional Appalachian step dancing is commonly known as “buckdancing” or “flatfooting.” In this presentation, we will examine the history of these step dances, identify the influence of earlier European and African dance styles, and trace the evolution of clogging – from the square dance teams of the late 1920s, when percussive footwork was first combined with southern Appalachian square dance figures, to the contemporary clogging of today.

Phil Jamison is nationally known as a dance caller, old-time musician, flatfoot dancer, and scholar of traditional Appalachian dance. A 2017 inductee to the Blue Ridge Music Hall of Fame, he has called dances, performed, and taught at music festivals and dance events throughout the U.S. and overseas since the early 1970s, including forty years as a member of the Green Grass Cloggers. Over the last thirty years, Jamison has done extensive research in the area of Appalachian dance, and his book Hoedowns, Reels, and Frolics: Roots and Branches of Southern Appalachian Dance (University of Illinois Press, 2015) tells the story behind the square dances, step dances, reels, and other forms of dance practiced in southern Appalachia. He has given numerous presentations on Appalachian dance – from the Smithsonian Institution to Beijing, China – and he teaches Appalachian music and dance at Warren Wilson College, in Asheville, North Carolina, where for twenty-five years, he served as coordinator of the Old-Time Music and Dance Week at the Swannanoa Gathering.