The Handmade Music School presents Clawhammer Banjo with Nora Brown on Thursday, May 6, 2021 at 3:00 EDT. The workshop will be presented via Crowdcast as part of our Handmade at Home online series. Cost is $1 to $100 (suggested donation of $15). 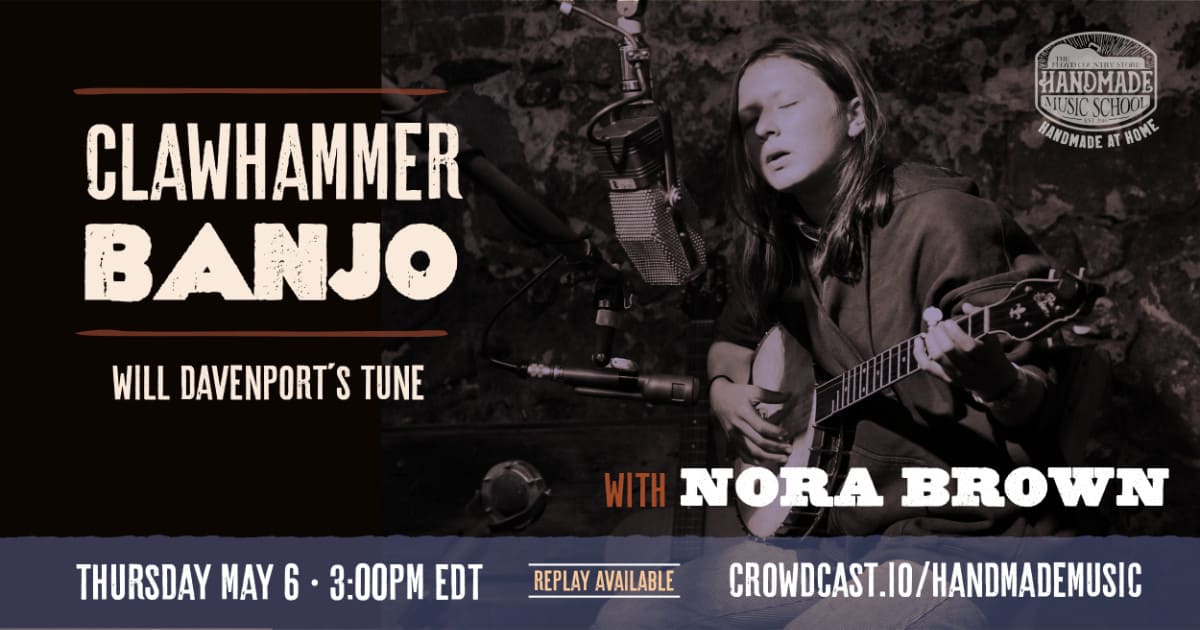 In this workshop I’ll be teaching a great clawhammer tune, Will Davenport’s Tune. I first heard this from Joseph Decosimo, and there are many versions out there but the true source would be Clyde Davenport. There’s actually a VIDEO recording of Clyde playing this tune, which is pretty rare to come across in old-time/traditional music, and I have attached it here. Note that my version of the tune is considerably different from his. This is a great workshop for you if you’re interested in adding to your clawhammer repertoire, and will be best for folks who are in the intermediate to advanced range around the clawhammer style.

Nora Brown started learning music at the age of 6 from the late Shlomo Pestcoe. From his studio apartment in Brooklyn, Pestcoe instilled in her the belief that music is meant to be shared. Nora plays old-time traditional music with a particular interest in eastern Kentucky and Tennessee banjo playing. Along with the banjo she’s interested in techniques of unaccompanied ballads form the Southeast region of the United States. She has played at numerous venues and festivals on the East Coast including TED salon in NYC, Joe’s Pub, the Floyd Radio Show, Washington Square Park Folk Festival, Brooklyn Folk Festival, Brooklyn Americana Festival, Oldtone Roots Music Festival, Irvington Folk Festival, Summer & Winter Hoots at the Ashokan Center, and has had multiple month long residencies at famed Barbès in Brooklyn NY.

Nora has won numerous banjo and folk song competitions at various fiddlers conventions including the Clifftop Appalachian String Band Music Festival and Grayson County Old-time and Bluegrass Fiddlers Convention. In October 2019 Jalopy Records released Nora’s first album of 11 traditional songs and tunes called Cinnamon Tree. It was produced by the legendary Alice Gerrard and pressed by Third Man Pressing in Detroit. It’s only available on limited edition vinyl with a digital download and liner notes. Cinnamon Tree landed #7 on the Billboard Bluegrass Charts the 2nd week of its release.