Join us at the Floyd Country Store on Saturday, September 24, 2022 at 7:00 pm for a live concert with Dashawn & Wendy Hickman’s Sacred Steel. Tickets are $20, available for sale online and in the store. 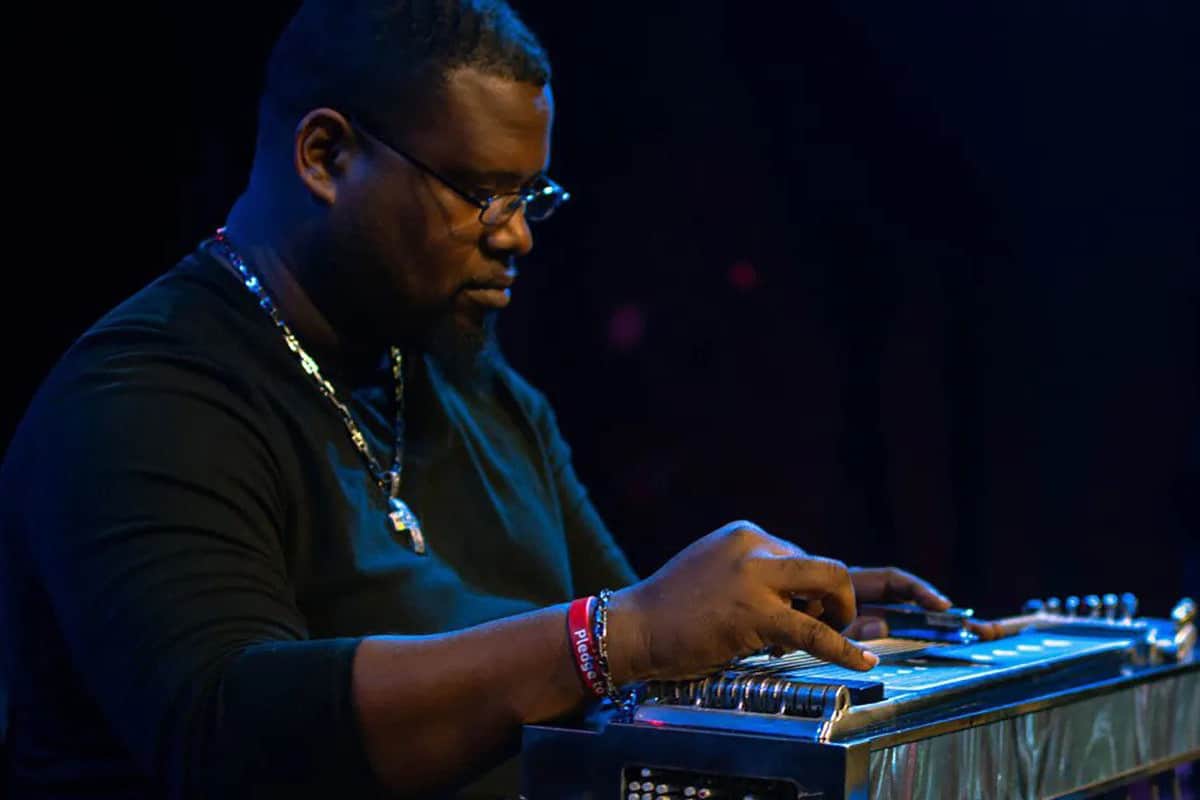 DaShawn Hickman grew up hearing his mom sing. She’d walk around the house and sing to the rhythm of the daily routine, loud enough for 8-year-old Hickman to catch the lines and play along on lap steel from his room down the hall. Sometimes, he’d ask her to sing it again until he got the line right. She’d self-rehearse to lead songs for the Sunday service at the House of God in Mount Airy—literally next door to Hickman’s childhood home—and took lap steel lessons on the side. In the Hickman house, you learn the song first, before you start riffing around on the guitar.

One day, Hickman thought, he’d get the songs down that way too: just the voice and pedal steel. The idea went quiet while Hickman toured and played with his sacred steel project, The Allen Boys, until he met up with Charlie Hunter in 2019. Hunter moderated a panel discussion at the National Folk Festival in Greensboro, North Carolina with Hickman, Merle Haggard’s guitar player Redd Volkaert, and Hawaiian slack guitar player Leward Kapana. Hunter and Hickman stayed in touch, with Hickman sitting in on several studio projects, such as Lucy Woodward’s record Stranger Blues, also produced by Hunter.

At the 2021 Folk Festival, Hunter caught up with Hickman after one of his shows. It would be cool to mellow out the pedal steel, Hunter said, and see what would happen if the pedal steel had more presence in the arrangement. Put the steel front and center.

Hunter called on Atiba Rorie, a classically trained percussionist in West African and Afro-latin music, and percussionist Breven Hampden, who also grew up playing in church and went on to study African, Latin and world rhythms. So when Hickman chose the song list, the idea of his mom singing those church songs while he played around on lap steel came back.

“I wanted to stick to my roots a little bit and not go so far left field,” Hickman says about the song list and the arrangements. “Because it makes so much sense, being a very vocal instrument that the steel is; you can hear what’s being said through it.”

And for Hickman, this record presents the music and the songs the way he heard them around the house. “I wanted it to be a showcase for what it really could be,” Hickman says about the songs he chose for the pedal steel. “How it can speak to your heart.”