Join us at the Floyd Country Store on Saturday, July 23, 2022 at 7:00 pm for a live concert with Dedicated Men of Zion. Tickets are $22 advance, $28 day of show, available for sale online and in the store. 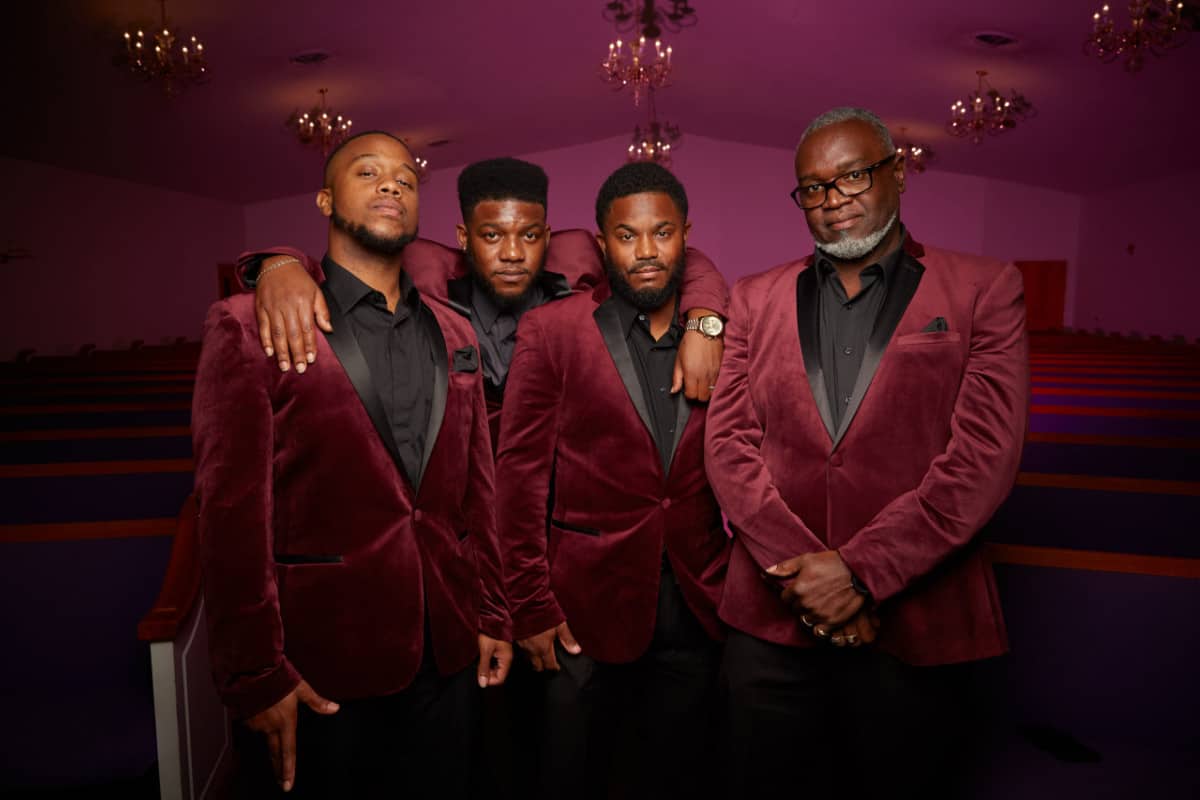 Harmony is serious business where the Dedicated Men of Zion come from. For their eldest member Anthony “Amp” Daniels, it was so serious that every day his mother would call her children inside, turn off the television, and make them sing in harmony, talk in harmony, do everything in harmony. Singing well together was a virtue that she and her sisters had learned from their own father, and Anthony gave it to his children in return. Older folks in the Black communities of rural North Carolina relied on that singing for everything in a time when both respect and money were especially scarce.

“That’s where that seriousness is from,” Amp remembers. “They demand respect. They’re serious about what they do, and they don’t play with God.”

The Dedicated Men of Zion came up out of this singing land of eastern North Carolina, around the city of Greenville and its small neighboring town of Farmville. Each trained in the church and the home, the group’s four vocalists – Anthony Daniels, Antoine Daniels, Dexter Weaver, and Marcus Sugg – share the bond of that upbringing and another more literal bond of kinship (they’re all family now through blood or marriage).

Theirs is a community dense with talent and legendary impact on the origins of gospel, funk, R&B, soul, and jazz; a place where the sounds of Saturday night and Sunday morning couldn’t help but jump their lanes. The group’s own backgrounds tell that story. Anthony Daniels, the eldest of the group, led a career in R&B down in Atlanta, backing up the likes of Bebe Winans, Toni Braxton, and Elton John. Antoine Daniels, the youngest member and son of Anthony, was playing keyboards and organ in church while simultaneously injecting his hip-hop production work with traditional gospel roots. But the church was always the backbone. Weaver, whose grandmother managed several gospel groups around Greenville, had sung with elder quartet groups for years, running into Anthony Daniels around the gospel circuit. When they both found themselves without a group, Weaver turned to Daniels and said “I don’t know what you’re gonna do but if you do something, I’m on board with you. I want to be with you.”

In 2014 Weaver and Daniels, with Antoine on keys, came together to form the Dedicated Men of Zion’s original iteration, along with singers Trevoris Newton and Darren Cannon. The group was quickly gaining a following in eastern North Carolina when Newton suddenly passed away in 2018. The loss of one member was soon followed by Cannon’s departure. The arrival of Marcus Sugg re-completed the group. Sugg, who had grown up singing in church choirs and a little on the side during a stint in the military, was soon to be Anthony Daniels’ son in law.

It was with this new vocal lineup that the Dedicated Men of Zion caught the attention of the Music Maker Relief Foundation while performing in a church concert organized by Music Maker and the Glorifying Vines Sisters, the longstanding Farmville gospel institution of Anthony Daniel’s mother and aunts. Joining Music Maker’s artist roster of roots musicians from across the South, the Dedicated Men of Zion began reaching new audiences not yet clued in to the rhythmic, electrified, sacred sounds of the rural southeast. Gospel being the music of personal and collective survival, even secular audiences were catching the spirit of joy and
determination. The message, for Anthony Daniels, was always that “if He did it for me, He’ll do it for you. Just keep praying and love one another.” In troubled times, there’s a need for a hopeful word and a testimony that there is a way.

Through Music Maker, the group connected with the newly founded record label Bible & Tire Recording Co., helmed by producer Bruce Watson of Fat Possum Records. Watson had been listening to the hard-praising drive of country gospel straight from church, and his new label was delivering that genuine soul sound beyond the church circuits from which it came. The gospel coming out of those small rural Black churches was in fact the headwaters of much of the commercial music made over the last half century, and Watson was ready to bet that mass audiences, already familiar with the sounds of classic soul, would discover a hunger for gospel’s emotional truth and purposefulness.

The Dedicated Men of Zion’s, Can’t Turn Me Around, was recorded in Memphis at Watson’s Delta-Sonic Sound in 2019. The album marks a moment of clarity for the group. By embracing their own roots, they knew they were pointedly taking a right turn where some of their peers had veered left in a race to make gospel sound like anything other than what it was back in the day: soul music. Each track on Can’t Turn Me Around comes from that overflowing heritage of gospel soul. Tradition sets a high standard of excellence. What more can new artists pour into that cup? The Dedicated Men of Zion accepted that challenge with the seriousness of their raising and the joy of spiritual inspiration. With their second album they get back to where they came from – soul and the salvation of harmony. In Anthony Daniels’ own words, “You want to live, get to where the root is. Get close to the root.”