Join us at the Floyd Country Store on Sunday, June 12, 2022 as we pair two of our favorite things in the world — music and food — in a special series of monthly events. This month’s Dinner & A Show features Sammy Lind & Nadine Landry paired with a delicious meal curated by Brian Feldpausch and the Cafe staff at Floyd Country Store. Dinner is served from 6:00 – 8:00 pm, show starts at 7:00pm. Tickets are $42 for dinner and show (table), or $22 for the show only (chair). 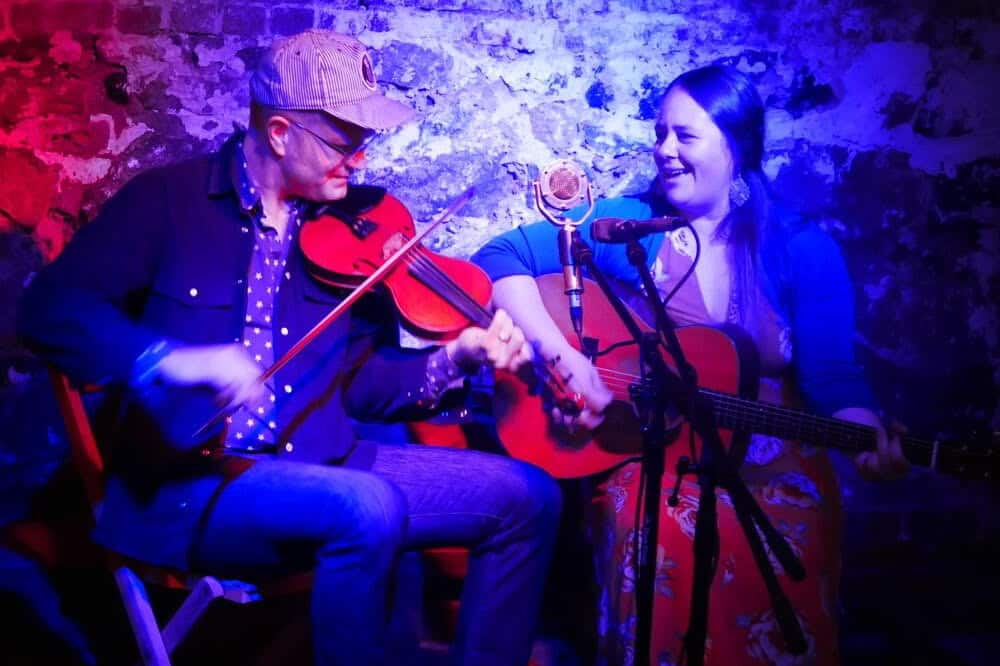 All dinners include side salad, coffee, tea and water, and bread for the table. Your meal choices include one of the following:

Nadine Landry and Sammy Lind are passionate about traditional fiddle music that has been passed on for generations, classics of the south west Louisiana Cajun dance halls and songs that could have filled a 50s honky tonk jukebox. They live in the Eastern Quebec and tour all over the world as a duo or with their bands Foghorn Stringband and Cajun Country Revival.

Nadine Landry was born and raised in a musical family on the Gaspe Peninsula on the east coast of Quebec. She’s spent a significant portion of her musical life playing upright bass in the Yukon with the Canadian bluegrass band Hungry Hill. She has also leant her talents to various bands ranging from old time to honky tonk to swing and Cajun.

Born in Minnesota, Stephen “Sammy” Lind has established himself as one of the most critically acclaimed old time fiddle players in the country. Cofounder of the Oregon based Foghorn Stringband, Stephen has traveled the world playing and teaching a vast repertoire of tunes from Appalachia and the Midwest. His playing reflects tremendous respect and passion for all the fiddle players and old recordings he spent countless hours learning from. Together they play tunes fiddles, old country and Cajun songs.

Their new recording “Granddad’s Favorite” reflects their versatility in genres and instrumentation. Alternating between fiddle, banjo, guitar and accordion, they play true to the roots of American music with energy and respect. They are members of the Foghorn Stringband, the Dirk Powell Band and play with Cajun extraordinaires Jesse Lege, Joel Savoy and the Cajun Country Revival and have recently collaborated with Alice Gerrard, Laurie Lewis and Tom Rozum and Tim O’Brien.