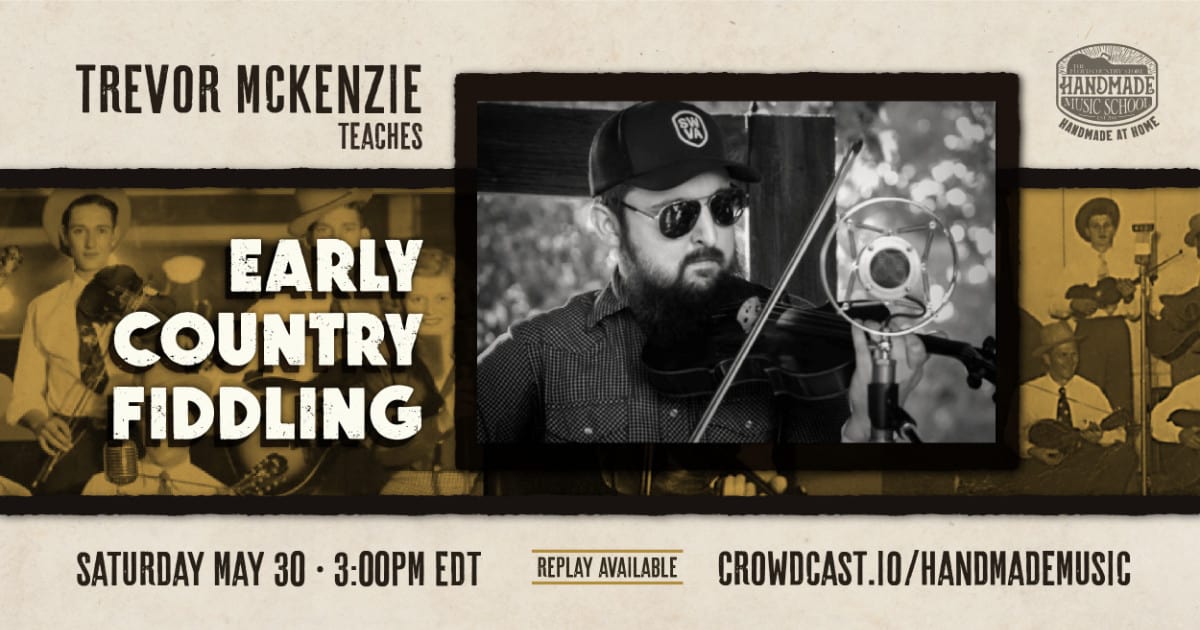 The Handmade Music School: Online Sessions presents Early Country Fiddling with Trevor McKenzie on Saturday, May 30, 2020 at 3:00pm. The workshop will be presented via Crowdcast as part of our Handmade at Home online series. Cost is $1 to $100 (suggested donation of $15).

This intermediate workshop will blur the lines between old time and bluegrass fiddling, taking inspiration from a generation of fiddlers on the line between the two genres. Casting a shadow of influence over this transitional style of fiddling are such fiddle greats as Fiddlin’ Arthur Smith and Tommy Magness. The workshop will focus on techniques such as double stops, judicious use of vibrato, as well as some tips on backing up singers for honky-tonk numbers such as two-steps and waltzes. In addition to the aforementioned fiddle kingpins there will also be nods to fiddlers from the southwest Virginia and western North Carolina area who carried this sound, born on radio broadcasts and in dance halls, into the 21st century.

Trevor McKenzie is a multi-instrumentalist and singer originally from southwest Virginia. The progeny of cattle farmers, he first gravitated to old-time music through an early interest in regional history and a keen desire to avoid doing manual labor. Though only mildly successful in the latter ambition, he gathered a respect for the communities, historical events, and stories which continue to build the canon of traditional music. Encouraged initially by family and church music, his formal musical training began at Jim Lloyd’s Barbershop in Rural Retreat, Virginia. In recent years he has continued to learn from and be humbled by skilled musicians from along the Appalachians and around the world. Trevor currently lives in western North Carolina where he performs as a sideman with several regional acts including the Elkville String Band and the Laurel Creek String Band. On weekdays, he puts his historical knowledge and dusting skills to work in the archives of the W. L. Eury Appalachian Collection at Appalachian State University.