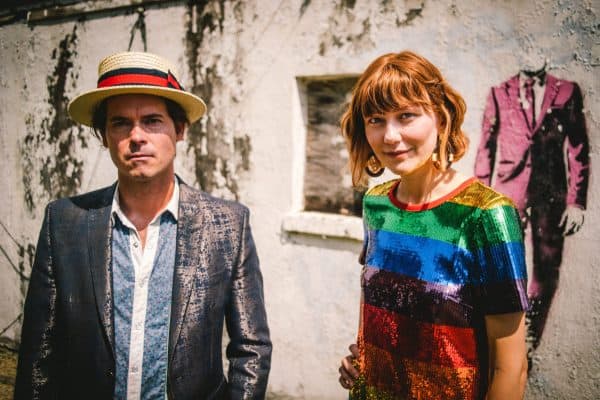 A virtuosic, award-winning guitarist with a gift for insightful songwriting, Molly Tuttle evolves her signature sound with boundary-breaking songs on her compelling debut album, When You’re Ready.

Already crowned “Instrumentalist of the Year” at the 2018 Americana Music Awards on the strength of her EP, Tuttle has broken boundaries and garnered the respect of her peers, winning fans for her incredible flatpicking guitar technique and confessional songwriting. Graced with a clear, true voice and a keen melodic sense, the 26-year-old seems poised for a long and exciting career. When You’re Ready, produced by Ryan Hewitt (The Avett Brothers, The Lumineers) showcases her astonishing range and versatility and shows that she is more than simply an Americana artist.

Since moving to Nashville in 2015, the native Californian has been welcomed into folk music, bluegrass, Americana, and traditional country communities – even as When You’re Ready stretches the boundaries of those genres. Over the past year, Molly has continued to accumulate accolades, winning Folk Alliance International’s honor for Song of the Year for “You Didn’t Call My Name” and taking home her second trophy for the International Bluegrass Music Association’s Guitar Player of the Year (the first woman in the history of the IBMA to win that honor).

“I love so many types of music,” she says “and it’s exciting to be a part of and embraced by different musical worlds, but when I’m creating I don’t think about genres or how it will fit into any particular format – it’s just music.”
Tuttle grew up in California in a musical family, performing at festivals with her father and two brothers. As a young girl, she took violin lessons but eventually grew more interested in playing guitar. Fortunately her father Jack Tuttle is a noted instructor in the Bay Area. “My dad brought me home a little guitar and he would sit with me whenever I wanted to play it and show me something,” she recalls. “He was really encouraging, and I think that’s what made me stick with the guitar. I liked having a fun thing to do with my dad and practicing didn’t feel like a chore.”

By the age of 11, Tuttle was attending bluegrass jams and decided that she wanted to do more singing. She took voice lessons from one of her neighbors, a classical vocal coach who taught proper technique without sacrificing phrasing. As a young woman interested in bluegrass, Tuttle admired bold songwriters like Hazel Dickens and looked up to Bay Area bluegrass musicians such as Laurie Lewis and Kathy Kallick.

As Tuttle matured, her musical tastes soon ranged from Bob Dylan and Gillian Welch to The Smiths and Neko Case. Because she kept seeing Townes Van Zandt referenced to by songwriters she admired, Tuttle dug into his catalog and found “White Freightliner Blues.” Her own exceptional rendition has become a showcase for her nimble playing, as well as a graceful nod to her musical heroes. And the circle continues; her own instructional videos of the song online have been discovered by the next generation of pickers, who look to her as a role model and for inspiration.

After graduating from high school in Palo Alto, Tuttle enrolled in Berklee College of Music in Boston, where she studied in the American Roots Music Program, focusing on guitar performance and songwriting. “In my time at Berklee,” she says, I developed much better understanding the fingerboard, so that gave me the freedom to play more of what I heard in my head and to try to play something that was meaningful to me.”

For the last twenty years, multi-instrumentalist Ketch Secor has been front man and fiddler for Old Crow Medicine Show. Described variously as alt-country, folk, and mountain music revivalists, Old Crow is an American roots string band with punk rock attitude and energy. Its earliest days stretch back to Ketch’s seventh grade year in Harrisonburg, Virginia, when he and friend Christopher “Critter” Fugua began playing music together – and its explosion onto the folk / Americana scene in the early 2000s led to a revival in banjo-driven old time music.

Born Jay Ketcham Miller Secor, Ketch attended New Hampshire’s prestigious Phillips Exeter Academy on scholarship. There, he learned to play banjo and fell in love with Bob Dylan. One of the Dylan songs Ketch discovered was a snippet entitled “Rock Me Mama,” an outtake from a 1973 Dylan recording session in Burbank, California. Homesick for Virginia, Ketch expanded upon the song, adding verses about long New England winters and hitchhiking south. That song, later co-copyrighted with Dylan, became “Wagon Wheel” – Old Crow’s signature song, released in 2004, and a No. 1 country hit for Darius Rucker in 2013.

After Phillips Exeter, Ketch attended Ithaca College where he immersed himself in the local old-time music scene, officially forming Old Crow with Fuqua and three others. In 1999, the band settled in a backwoods cabin near the college town of Boone, North Carolina. There, busking on a street corner, they were discovered by bluegrass-folk-country-blues legend Doc Watson, who invited them to participate in his annual MerleFest music festival. “That gig,” Ketch would later say, “changed our lives.” The group moved to Nashville and began recording with labels Nettwerk, ATO Records, and eventually Columbia Nashville.

Old Crow Medicine Show became members of the Grand Ole Opry on September 17, 2013. That same year, they received the Trailblazer Award from the Americana Music Association and, two years later, won the 2015 GRAMMY Award for Best Folk Album with their LP, Remedy. Known for his interest in Appalachian history and musicology, Ketch recently wrote a children’s book, Lorraine – his retelling of a Southern folktale, interwoven with the power of music.