Scruggs-Style Banjo: Other Keys Out of Open G with Frank Evans

The Handmade Music School presents Scruggs-Style Banjo: Other Keys Out of Open G with Frank Evans on Thursday, February 4, 2021 at 3:00 EST. The workshop will be presented via Crowdcast as part of our Handmade at Home online series. Cost is $1 to $100 (suggested donation of $15). 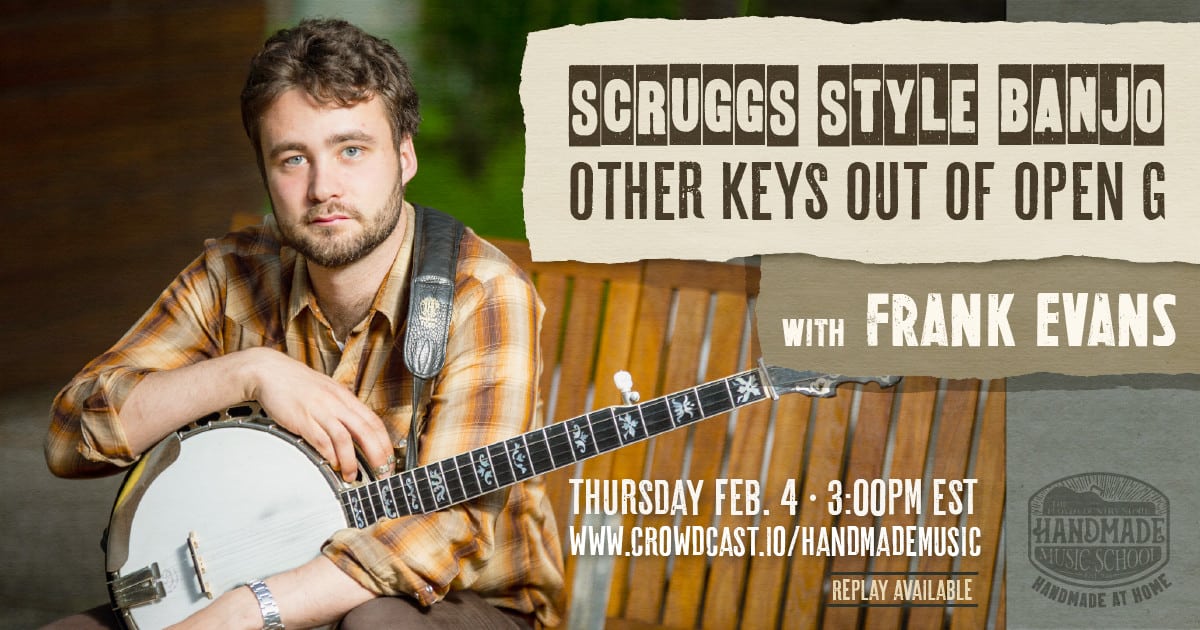 Learn a series of tricks and patterns that will open up playing in all keys out of open G. We will be mainly focusing on C, D and E, but the techniques discussed in the class will be applicable to any key. We will be discussing improvising concepts as well as back up techniques. There will be tablature and a review video provided.

Frank Evans fell in love with banjo at age 10 and quickly developed a passion for Old Time Appalachian music. He won the youth banjo contest at the Clifftop Appalachian String Band Festival when he was 13 and later placed second over all. In 2010 Evans joined the bluegrass outfit The Slocan Ramblers and recorded their first album Shaking Down the Acorns produced by Juno award winner Andrew Collins. The album gained attention world wide and led them to open for Steve Martin at the Toronto Jazz festival in 2013. In 2011 Evans became the first banjo player to attend Humber College of Music where he studied Jazz. Currently Evans tours extensively year round throughout the world and has played at Rockygrass, Merlefest, and Jacobs Ladder Festival in Isreal. He has taught at the Rockygrass Academy, Nimble Fingers Bluegrass Camp and has played, recorded and taught alongside Natalie MacMaster, Tony Trischka, Peter Rowan, John Reischman and Ken Whiteley. The Slocan Ramblers released their most recent album, Queen City Jubilee in June which is nominated for a Juno. Evans is based in Nashville TN.