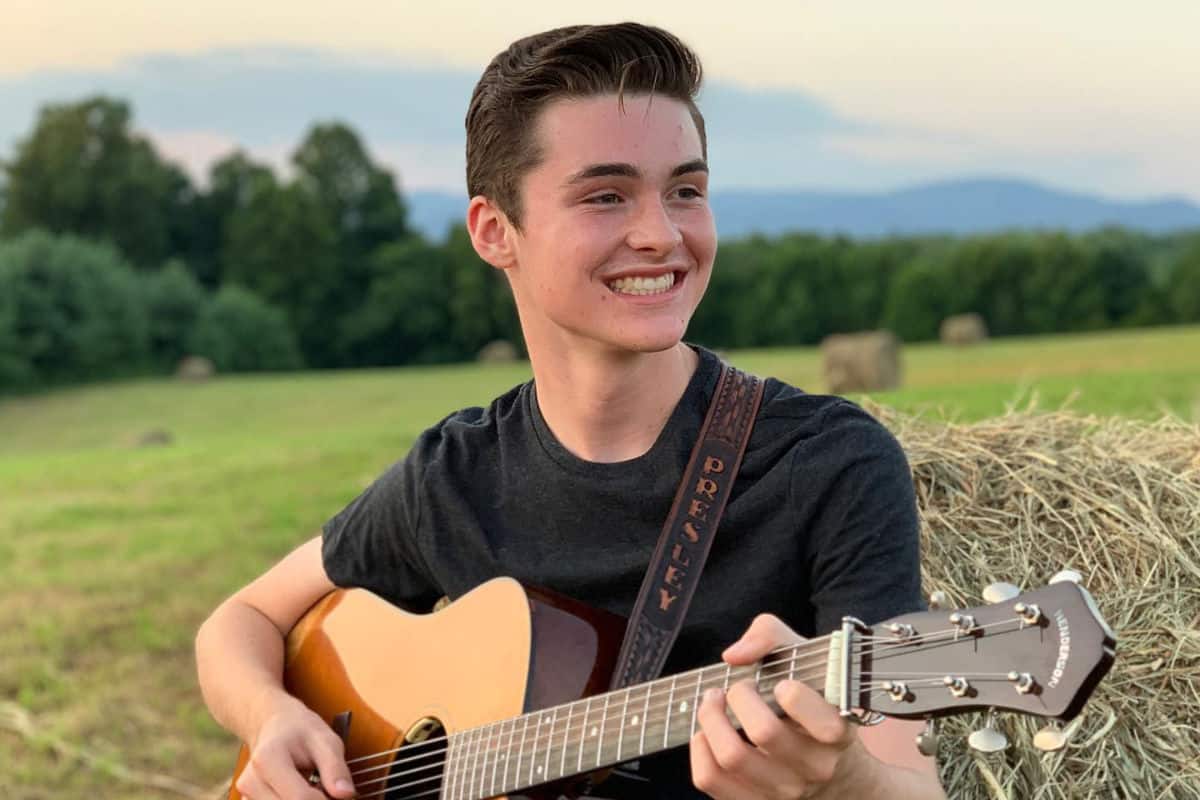 Join us Saturday, November 23, 2019 at 7:30 pm for a live show with Presley Barker & Steve Lewis. Tickets are $12 advance, $15 day of show. With the recent passing of Helen White, Wayne Henderson will not be able to make this evening’s’ show. Presley will instead be performing with champion flat-picker Steve Lewis.

At age 14, Presley Barker has been playing acoustic guitar for seven years. Living in the NC mountains and listening to Doc Watson on the radio inspired Presley to begin picking fiddle tunes and bluegrass music. He has been influenced and mentored by Steve Lewis, Wayne Henderson, and Bryan Sutton. He has quickly emerged as an astonishingly gifted flat-picker. In the summer of 2015, Presley won first place in the prestigious Adult Guitar Competition at the 80th Annual Galax Old Fiddler’s Convention in Virginia, and in the summer of 2016, he was named West Virginia State Flatpicking Guitar Champion. He has appeared on the NBC Today Show with Al Roker, National Folk Festival, Richmond Folk Festival, Masters of Steel String Guitar Event in Washington, D.C., PBS Song of the Mountain Show, Blue Ridge Music Center, Houstonfest, and Merlefest. Presley also appeared on Steve Harvey’s NBC show “Little Big Shots”. Just recently, he was so honored to receive first place and get a D28 Wayne Henderson Guitar at this years 2017 Wayne C. Henderson Guitar Competition at Grayson Highland Park in Virginia. Presley released his first solo album entitled “JUST-TEN” in the fall of 2015 and was honored to be on the Bluegrass Today Airplay Chart.

By day, Steve Lewis is a commercial/residential painter, by night and every weekend, a national banjo champion. He still lives in Todd, the small mountain community near Boone where he grew up. Steve lives with his wife, DeAnna, and their children, Josh, Scott, and Molly.

Just before his third birthday in 1967, Steve held his first guitar. More than fifty years later, he is still picking. By the age of seven, he was listening to his father’s albums, the radio or watching musicians on the television. Influencing Steve during this time were Tony Rice and close-by neighbor in Deep Gap, Doc Watson. Not only did Steve spend his time picking the guitar, but by age ten he began playing the banjo. This self-taught picker’s heroes included J.D. Crowe, Earl Scruggs and Tony Trishka.

His father still enjoys telling the stories of “hauling” Steve around the Boone area to pick for everyone who would listen. From entertaining at the local restaurants to playing at nearby Lees-McRae College, Steve fascinated people who enjoyed seeing this wonder boy with a guitar bigger than he was, playing favorites like Foggy Mountain Breakdown. In 1976, he played for the Daniel Boone Cloggers and performed for many at Opryland in Nashville, Tennessee. His first professional gig was as a member of Tommy Faile band.

Steve also played in the noteworthy band, Vintage Blend, and its successors, Ric-O-Chet and Last Run. During his tenure with Ric-O-Chet, the band had a hit, “My Last Run,” written by Willard Gayheart, that was on the national bluegrass charts for four months. Lewis has traveled throughout much of the United States performing and winning contests that have included RenoFest, Galax Old Time Fiddlers Convention, MerleFest, and Walnut Valley. He currently holds the title of Walnut Valley National Bluegrass Banjo Champion, and he placed second in their guitar competition. Despite his many honors, Lewis, a genuinely modest man, makes light of being an award-winning musician and a true champion, and he quickly deflects the praise and recognizes others.