Writing New Tunes in a Traditional Style with George Jackson 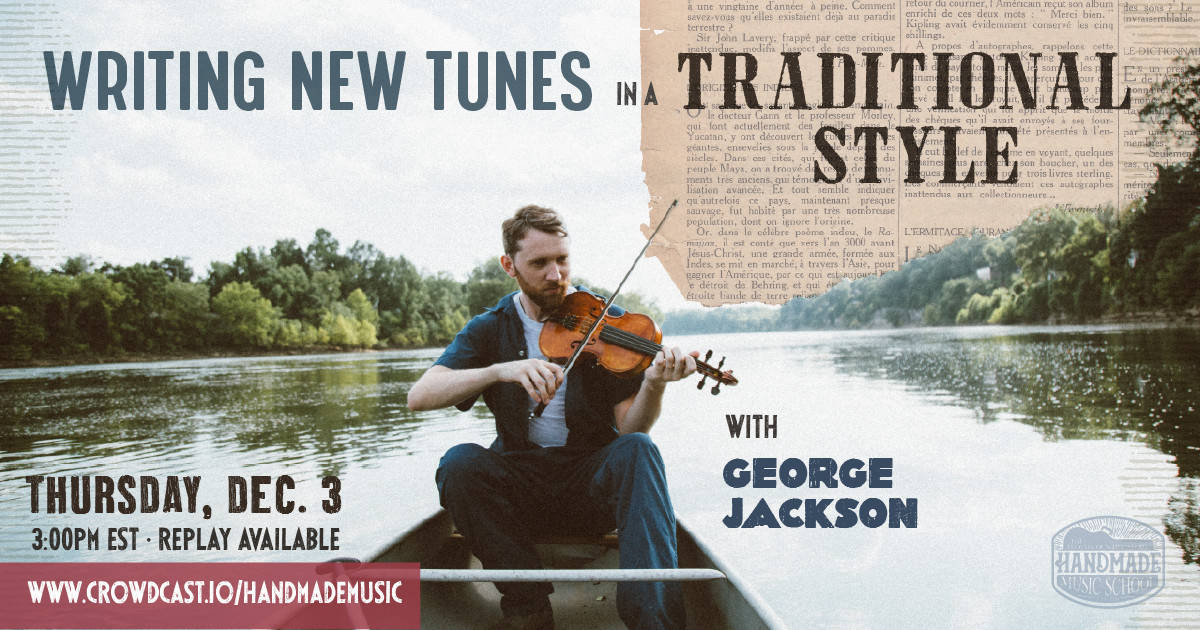 The Handmade Music School presents Writing New Tunes in a Traditional Style with George Jackson on Thursday, December 3, 2020 at 3:00pm EST. The workshop will be presented via Crowdcast as part of our Handmade at Home online series. Cost is $1 to $100 (suggested donation of $15).

Join fiddler and tune writer George Jackson for a deep dive into fiddle tunes from the writer’s perspective. Learn how to take inspiration from great old tunes you know and use time tested ideas to help inform your decisions to create something completely new, unique and that fits into the stylistic parameters of your chosen fiddle style. George will help you get creative ideas flowing so you can build up your tool box of writing techniques until you’re brimming with new fiddle tunes ideas.

George Jackson is a Nashville-based fiddle player who has toured as a band leader and fiddler for hire, having worked with artists such as Front Country, Peter Rowan, Missy Raines and many more. Born in New Zealand, George grew up in a musical family and heard bluegrass around the age of 14, immediately falling in love with the style he started trying to work out how to play it from recordings and from the few mentors he could find in New Zealand. Moving to Australia as a 16-year-old, he won the Australian National Bluegrass Championship on fiddle three times and toured the country with his bluegrass band, “The Company” and oldtime trio (with Andrew Small) “One Up, Two Down”, playing many major folk festivals on the Australian circuit.

As a resident of Nashville and the USA from 2016, George has been focused on oldtime fiddling and released an album of original oldtime style fiddle tunes, “Time and Place” in 2019 to acclaim. He was awarded the 2019 Mike Auldridge composition award by the DC bluegrass union for his tune “Chapel Hill Deer Stalk” and sparked a viral fiddle tune hit with his composition “Dorrigo”, in which hundreds of musicians learned the tune and posted videos of themselves playing it online, becoming known as the “Dorrigo Challenge”. Each track on the album “Time and Place” is written by George and named for its time and place of composition, tracing his journey from New Zealand to his new life in the United States, exploring ideas of authenticity and identity through fiddle music. In his free time, George brews his own beer and cooks Cajun food. He loves Swedish fiddle music and—fun fact—he was a competitive Highland dancer until the age of 21.