The Handmade Music School and Southwest Virginia luthier Jackson Cunningham are offering a chance to win one of Jackson’s beautiful custom-made guitars.

Congratulations to Liz Lanham of Banner Elk, NC for winning the guitar! And a huge thanks to everyone who purchased tickets!

The guitar is light weight and the small body sits comfortably with any player. The neck profile is easy to play and hard to put down. The woods used on this guitar are of the finest quality carefully selected from the builders personal reserves, featuring an Appalachian Red Spruce top harvested in Maggie Valley, North Carolina, curly figured Honduran Mahogany back, sides and neck, old growth Appalachian Red Spruce bracing, and a highly figured old growth Brazilian Rosewood fingerboard and bridge. These woods are all brought to life with a beautiful warm sunburst finish, reminiscent of the classic guitars of the 1930’s.

On Sale April 21 - June 10, 2021
Each ticket purchased will be placed in a bucket and a name drawn on June 11th via Facebook live & during The Floyd Country Store's Friday Night Jamboree! All proceeds support The Handmade Music School.

TICKETS ARE NO LONGER AVAILABLE 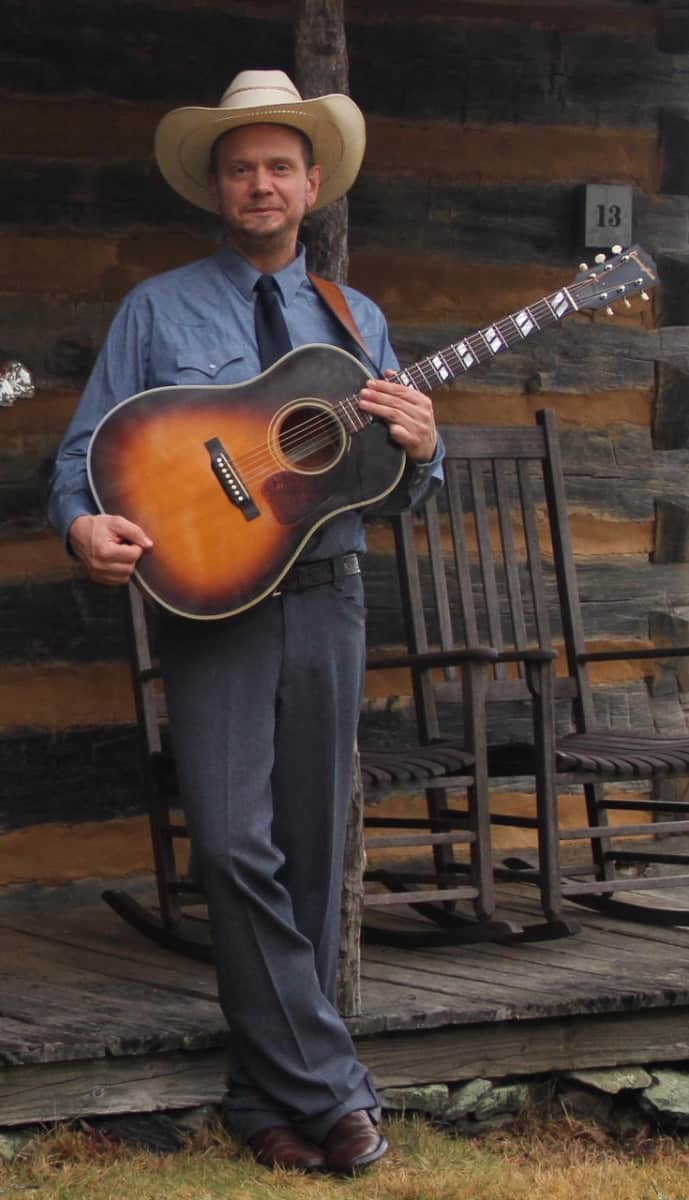 Raised in rural Southern Oregon, Jackson grew up in a home where music and woodworking were a way of life. His father was a master craftsman and these skills were passed down at a very young age. Family ties and a love of music brought Jackson to Southwestern Virginia where he began building instruments full time with the generous help of many local luthiers. His driving inspiration has always been the instruments his musical heroes used to perform classic American roots music.

After 15 years, the shop remains a one-man operation and handwork is still the foundation of each build. From selection of tonewoods, construction, custom neck profiles, and down to the final fit, finish and setup, Jackson ensures each step is taken with meticulous care. His instruments are sought after by collectors, and have been played by musicians on stages around the globe. They have also been featured at the world’s premier instrument retailers, including Gruhn’s Guitars in Nashville, Tennessee and Folkway Music in Ontario, Canada.

All are inquiries welcomed and encouraged.

When Jackson reached out to Floyd Country Store with the idea for the raffle, we were so grateful for his support that our team at Handmade Music School and Floyd Country Store decided to build a beautiful campaign to tell the world not only about Jackson’s big heart, but also about how incredibly talented he is.

So, we engaged our friends over at Beehive Productions to go into Jackson’s shop and capture his process in building these masterpieces. This documentary demonstrates the creativity and talent of Jackson and his guitars while also capturing fun and heartfelt commentary and some tunes from some of our favorite musicians and friends! It also highlights the great work of Beehive Productions. Please enjoy the first two parts of this documentary. Stay tuned for part three next week!

Building a guitar with Jackson Cunningham

Trevor McKenzie is a fiddle/guitar/banjo player and singer currently residing in Deep Gap, North Carolina. He has taught workshops at the Augusta Heritage Center’s Old-Time Week, Stringendo Summer Strings, and is an instructor in the Junior Appalachian Musicians (JAM) program.  He is an archivist in the W. L. Eury Appalachian Collection at Appalachian State University where he works to preserve field recordings, ballad collections, and a host of other materials related to the history of the Appalachian region.

Martha Spencer is a singer-songwriter, mountain musician and dancer from the Blue Ridge Mountains of Virginia. She grew up in the musical Spencer family and learned to play several instruments (guitar, fiddle, banjo, bass, dulcimer, mandolin) and flatfoot/clog at a young age. She performs and has recorded with groups such as Whitetop Mountain Band, Unique Sounds of The Mountains and The Blue Ridge Girls, and has taught music and dance workshops around the world.

Mac Traynham is an accomplished fiddler and banjo player as well as a fine guitar player and singer. Influenced by well known and obscure musicians of the past, Mac has developed a hard-driving style of playing which keeps the rhythm going strongly and delights dancers! He teaches at numerous music camps and has won many ribbons from various Fiddler’s Conventions.

To sell 800 tickets and donate proceeds to The Handmade Music School.

The Handmade Music School is a nonprofit institution dedicated to teaching old time, bluegrass, and traditional music and dance from Floyd County, Virginia and throughout the Blue Ridge Mountains.
About HMS

For questions about the raffle please contact The Handmade Music School at (540) 251-2571 or info@handmademusicschool.com.