Join us for The Virtual Floyd Radio Show on Saturday, December 5, 2020 at 7:30 pm EST with hosts Andrew Small & Ashlee Watkins and special guests New Ballards Branch Bogtrotters, The Albanie Falletta Band, and Aaron Olwell. Tune in to the livestream on our Facebook or Youtube page. 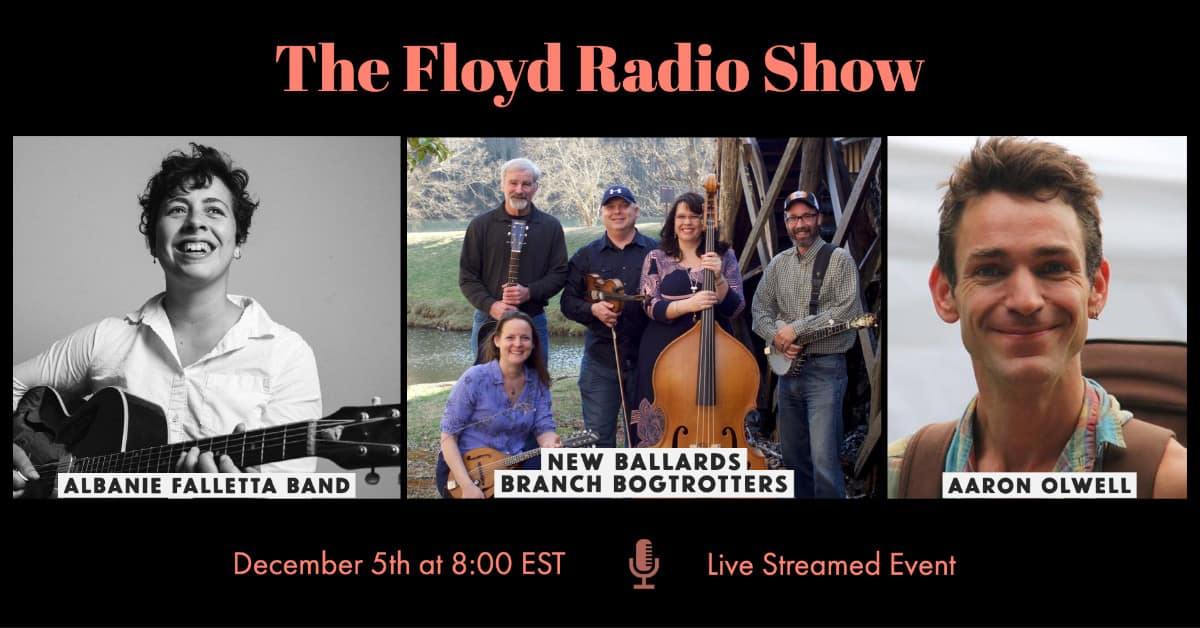 About 25 years ago a group of musicians from the Galax, VA area formed a new band. The New Ballards Branch Bogtrotters took their name, in part from the original Bogtrotters of the 1930’s also because band leader Dennis Hall lives on Ballards Branch. Denis’ home is very close to the home of Uncle Eck Dunford who played fiddle in the original band. The other members of the original Bogtrotters were Uncle Wade Ward, his two brothers, Davy Crockett Ward, and Fields Ward, and Doctor Davis. They won the very first fiddlers Convention in Galax setting a precedence for all that follow in their footsteps. The New Ballard’s Branch Bogtrotters continue to play in the traditional Appalachian string-band style often playing for square dances around the region. Rounding out the Bogtrotters lineup are: Eddie Bond on Fiddle, Dennis Hall on guitar, Josh Ellis on clawhammer banjo, Bonnie Bond on bass and Caroline Beverly on mandolin. Old time music is alive and well, and continues to attract fans of all ages. The New Ballards Branch Bogtrotters remain a driving force in carrying the traditional music of the Virginia/Carolina Blue Ridge into the new millennium. They are an inspiration for future generations of mountain musicians!

A native of Monroe, Louisiana, Albanie was in her formative years exposed to the local music of Louisiana: the sounds of cajun, zydeco, blues and gospel musics at festivals and backyard parties.

Shortly after relocating with her family to San Marcos, Texas at the age of nine, Albanie began taking guitar lessons and developing an interest in acoustic-roots and electric blues, punk rock, and hair metal. Albanie began her love and study of early American Jazz as a freshman in highschool in Wimberley, Texas, when she was exposed to the Parisian Romani guitarist Django Reinhardt.

Listening religiously to recordings of Reinhardt, Louis Armstrong, Billie Holiday, Fats Waller, and other such great figures of jazz, she developed her feel for swing. Soon she was performing alongside mentors Slim Richey, Django Porter, Ray and Linda Sriro, the Jazz Pharaohs, and other players of the Austin scene where she lived and performed in the years after high school. Between 2008 and 2013, Falletta led her own swing/early jazz band Albanie and Her Fellas, and was a member of several groups including the Thrift Set Orchestra, Guy Forsyth and the Hot Nut Riveters, Ivy Divey (a swing trio featuring three part harmony singing with Emily Gimble and Katie Shore), and others.

In the summer of 2013 Albanie relocated to New Orleans, Louisiana, where she is currently living and performing solo, and with various traditional jazz and swing ensembles. Shortly after moving to New Orleans, Falletta began making trips back to Austin to study early acoustic fingerstyle blues with Steve James, and to continue performing with Guy Forsyth, Thrift Set Orchestra, and the Fellas. She now performs mainly in and around the crescent city, and tours as a solo act, performing New Orleans traditional tunes, acoustic blues, ragtime, and original songs.

Aaron Olwell is a multi-instrumentalist (flute, whistle, left-handed fiddle, concertina, banjo…) and the son of world-renowned Irish flute-maker Patrick Olwell. He plays both traditional Irish and Old-Time music, which he learned through numerous trips to Ireland and summer camps in North Carolina and West Virginia. Aaron can be heard on recordings by Hell On The Nine Mile, Light and Hitch, and The Magic Square.

You can make a donation to support the musicians and The Floyd Country Store through the COVID-19 pandemic using the links below or through the Venmo mobile app to @floydcountrystore.

Donate on PayPal
Donate on Our Website
Scroll to Top