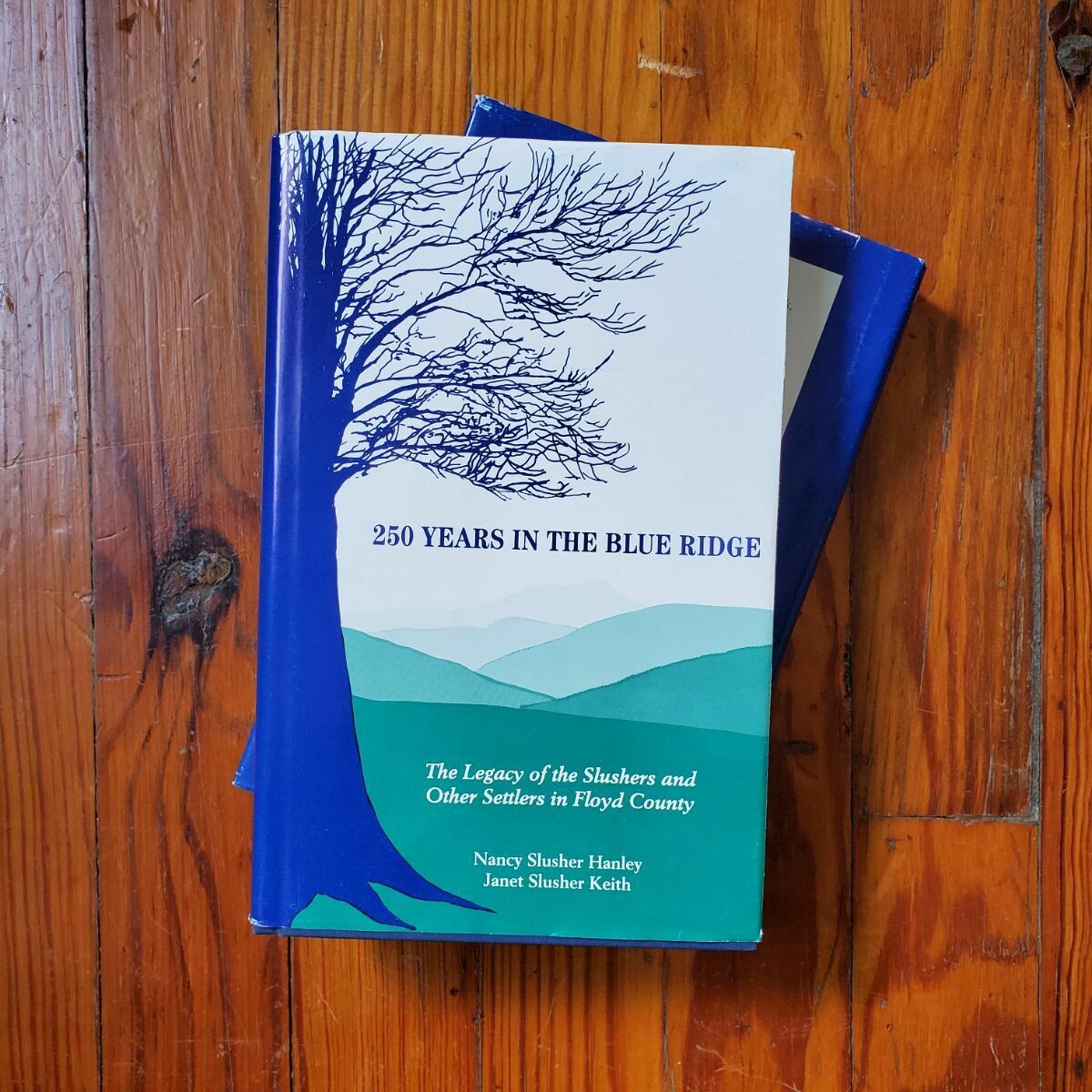 250 Years In The Blue Ridge by: Nancy Hanley & Janet Keith

The Legacy of the Slushers and Other Settlers in Floyd County

Along the Wilderness Trail to the new River . . . through Wood's Gap . . . onto Goblintown Creek, Huckleberry Creek, Greasy Creek, Burks Fork of Little River, the Black Ridge, Buffalo Mountain . . . TO the tiny communities of Jacksonville, Rush Fork (Santos) and Willis . . . came an unfolding line of ancestors who emigrated from Europe in the 1600's and 1700's and eventually made their way to southwestern Virginia.

To read 250 Years in the Blue Ridge is to open a time capsule holding the folklore of pioneer families . . . Slusher, Gardner, Corn, Helms, Wood, Burnett, Hylton and others . . . who lives in what are now Floyd, Montgomery, Patrick, Franklin and Carroll Counties. Sometimes tragic, but often humorous, the stories and anecdotes which the "Slusher girls" have collected will leave you nostalgic for a vanished way of life.

Nancy Hanley and Janet Keith have found the tapestry of their ancestry to be revealing and colorful. John Burnett (from Scotland) served in the mid-1600's as "Merchant of the King" for England's Charles I . . . The German inscription on the fieldstone grave marker for Peter Schlosser (Slusher), in a cemetery near the Antietam Battlefield, reads in part:". . . When you awaken the dead on that day . . . reach out your hand to my grave." Peter had arrived on the ship Dragon from Germany with his brother through the port of Philadelphia in 1732 . . . Elijah Hylton (of English lineage from a sexton of St. Peter's Church of the Church of England) was among the very first settlers in the New River area (before 1775) . . . The autobiographical narrative of the Peter Corn, 19th century farmer and Primitive Baptist preacher, expressed his desire " . . . to leave something for future generations to look upon when I am gone . . .," a sentiment succinctly stating a primary purpose for this book.

The sisters zero in on the lives of their paternal grandparents, George William and Dicie Clementine Permelia Jane Corn Slusher, and their fourteen children. Then, the narrative continues with Ruth and Freeman, Nancy and Janet's parents, and life on the "S" Farm as the girls and their younger brother grew up.

Friday - Monday: Use coupon code TURKEY20 to save 20% off your order in our online shop!